And wouldn't you believe: another update!

I have been trying various ways of connecting the hoses for my dust collection system to the main pipe... all failed in one way or the other when it came to connecting two different pipes at an angle. Yes, I know there are pre-made pieces for that too but they are way over the top expensive and I would need to cut them in half and have them somehow wrap over an equally sized pipe. That wouldn't work because these pipes don't change their form all that well. I ended up with some 3mm plastic material that usually gets used to build model houses and such. It looks flimsy but it does work for my purpose and it can be heat-formed to exactly match the required curve of the pipe.
Well... what turned out to be the bigger problem: The pipes didn't take glue very well... that is to say: not at all. I finally had the bright idea to add some small blocks of wood in the right position and screw the two pieces together before applying generous amounts of glue to seal off the connection. So far it seems to work and my planer got that treatment first and worked like a charm.
Today I fired up "batch mode" to create the other junctions that I need. I do NOT want to start fiddling with hoses when changing tools, just like I don't want to unplug stuff in between. So: each stationary power tool gets its own outlet AND dust collection port. Turns out, that's quite a lot!

Here's today's turnout. The glue and connect part is still pending but The more difficult parts are now done. 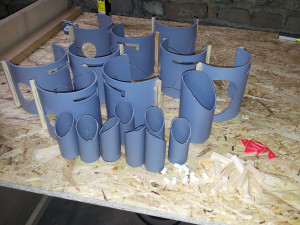