Yay for progress! ...and working on several projects at the same time x.x

Today, I started with the cutting board project: tried to get the surface as smooth as possible. The glued up board was too wide for my planer (even tough I got the larger model, duh) so I had to use a handheld one to rough it out and then sand the surface... which proved not as level as I needed it for the upcoming second glue up. *sigh* So I reluctantly agreed with myself to run the strips - which I had cut by then - through the table saw and "level" it like that. Also not perfect but much better than eyeballing it. While I was at it, I also learned what "kickback" is. Google it, it's fun! ;)

On a related note: I "suffered" my first injury today. Don't ask what lead to it, I only realized there was some blood after it had happened. No idea when and where and what... 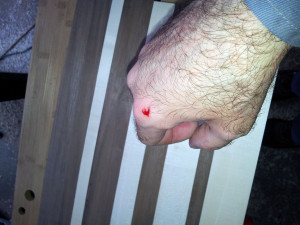 Here's the cut up board: 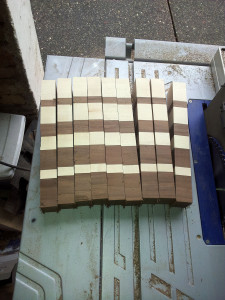 And here's the "dry assembly" - i.e. trying to get everything lined up: 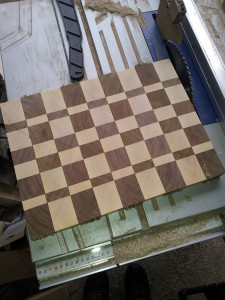 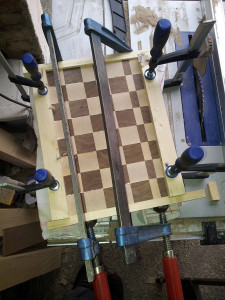 The "park bench" project came to a finish too: I gave the boards of the sitting area a nice roundover (while sitting on it, hey you got to take the fringe benefits) and a first layer of paint. Here's how it looked before the paint, I'll post another picture once the second coat is on and it looks a bit more even: 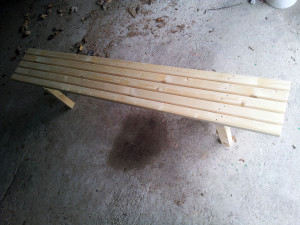 What else? Oh yes: Intermediate cleanup time! Lots of sawdust around everywhere, not to mention tangled wires. But now that I got these projects so far along, I could actually start getting the work table project back on track: Made room for the first segment. Yay!
Collapse