Another very exhausting day. This time with some pictures :)

I started off by planing some of the left over stuff from yesterday. The planer bench is coming together nicely, cut some pieces to make struts for the legs. They are set at an angle to give the bench a bit more area to stand on and make it more stable and less "tilt-y" once the planer gets mounted on top of it.
After mounting these, I cut a left over piece of MDF board to size and glued/screwed it on the load bearing frame. Also added four longer screws to additionally secure the legs. Now I trust that thing :)

Here's the net result of it: 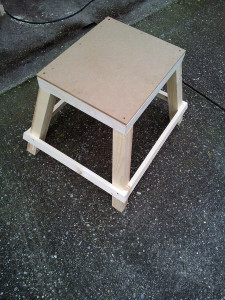 Up next, I cut the remaining struts for the bench and assembled it in a similar matter: glue (water proof) and screws. Tried sitting down on it too: the boards give a tiny little bit but I think it should be fine. Still pondering adding a central support column, kind of a third leg thingy... Again, no pictures for lack of space. It started raining and I'm still playing tetris with my tools and projects in my workshop.

And then, there was that cutting board idea... and WOW... walnut wood is hard! I had to cut off part of the board I got so it would fit into the planer, but my circular saw couldn't take it in one go... I had to make five cuts to get through. Every time I tried to cut the whole board, I would end up in a smoke cloud after a few mm...

I planed both the maple and the walnut board to the same thickness and cut off a chunk to become my new fancy board and started to cut off the required strips to form the neat pattern from the how-to video: 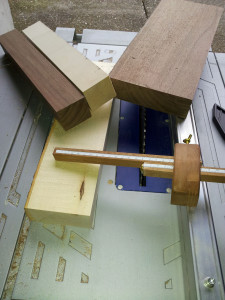 Finally, all strips cut and sorted: 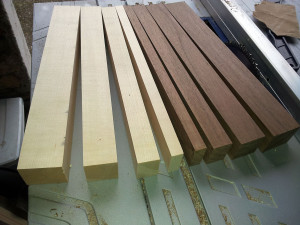 Now for the first round of glue and clamps: 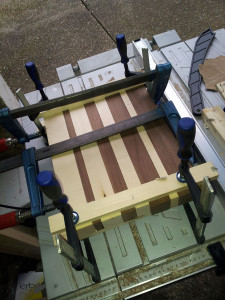 And tomorrow I shall see if my sanding of the glue surfaces was a well-enough job or if there are any cracks forming...
Collapse