Finally! The weather was cooperating and I had some free hours at the same time. Thus I went to my workshop and broke in the new tools!

My current "big" project is still the work table for all the new neat power tools. They are a bit cramped now and I need help arranging them as needed (I'm still not allowed to lift heavy stuff) but without them, I can't build the table...

The table is designed to use cheap parts from the hardware store and yet still end up sturdy enough to put several power tools on top. I'm planning on a ~2cm OSD (english name?) board as the work surface because: dead cheap and it takes a beating. Also, since the 2cm will likely sag a bit, I'm putting in some support beams between the leg construction.
The legs are made of 5x5cm wood and will get lap joints on top to form an "n" shape, with a half lap joint for a 5x2.5cm cross beam near the bottom - a place to put another board for storage.
The support beams between the "n"s should also get some joinery but I'm not yet completely sure which one.

I got the material (except the work surface boards) about a week ago and sanded the leg material so it's smooth enough to touch. This is shop furniture and I didn't yet have my planer back then so "spinter free touchy" is good enough for that project :D

The table is supposed to go into and around a corner of my shop in an "L" shape. The longer part of the "L" is going to be 4m and the shorter one 3m. This results in 3x3m accessible table with a 1x1m corner piece.
To have enough support for the weight and get a decent stable result, I'm putting a leg every meter. Thus, I need nine legs, which gives me 27 pieces of 5x5 wood to cut to size, joint and assemble. I did cut them to length today along with the 5x2.5 ones for the cross support beams. 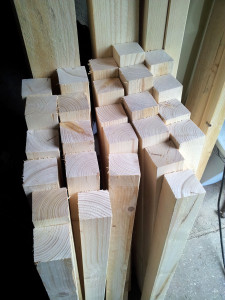 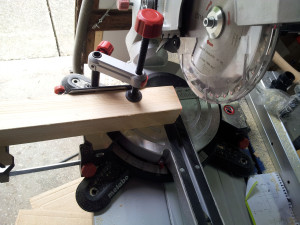 Having finished the work that can be done with the miter saw, I had it put away to clear my table saw. To cut most of the joints into the legs, I needed some sort of support: running a piece of wood across the saw and not along it is quite dangerous to do freehand, so I didn't even try :)

Oh... wait a second... that table saw is brand new... better take some measurements to see if anything needs adjusting. Lucky me, the saw seems to be set to a very decent factory default: the blade runs nicely parallel to the miter slots and the fence has almost no front-to-back deflection, which is rare for such a "cheap" model. The only thing that I had to do was clean up the miter slots a bit since the table surface is made from cast aluminium and there was some residue near the bttom edge of the "T" groove.

I started with the rails for the miter slots from some scrap hardboard I had around. Its height fit perfectly, so I only needed to cut off a few strips in the right width. Glued together already inside the slot of the saw, I added some screws through the base board of the sled to hold them in place.

The front and back fence for the sled were cut from a single piece of plywood. The back one I doubled up for additional stability and support for clamps and stuff. Cut a nice decorative edge in it using the bandsaw, glued the two parts together and sanded them to match. Added a nice roundover and glued/screwed both fences to the base board.
For the back fence I used extra double and triple care to get it straight and perpendicular to the blade. I should now be able to cut most parts quite fast since I can put a stop block in that sled and have a nice repeatable cut without any measuring. Just what I need for those 18 and 9 leg pieces :)

By the time I arrived here, my shop time was up: neighbors might protest against power tools after 8pm, so better not risk the nice relation I have with them. 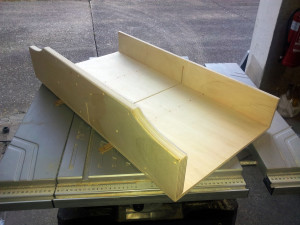